Leipzig awaits those interested in culture with a variety of attractions. If you have visited the St. Thomas Church in the city centre, where the “Thomanerchor” perform, you can complete your knowledge of the famous “Thomaskantor” in the Bach Museum in Leipzig. On the occasion of the tenth Bach Festival in June, the music of the Baroque composer will be performed in around 100 individual events in diverse interpretations from traditional to modern.

The free open-air concerts at the market square are also a very special experience. Easter Mass, the city festival, the “Classic Open” and the Christmas market all take place at the market square throughout the year. The “Rathaus” houses the “Stadtgeschichtliche Museum”. Take the passage under the town hall tower and you will reach the “Naschmarkt” with the pretty Old Exchange and the Goethe Monument. The St. Nicholas Church too, which has become the symbol of the Peaceful Revolution of 1989, is only a few streets away.

Those who also want to deal with the dark sides of the GDR’s past do not have to go far to see the Stasi Museum in the "Round Corner", the former district administration of the state security. In addition to music, art also plays an important role in Leipzig. Art lovers will find the “Bildermuseum” in the city centre. The collection includes works from the Middle Ages to contemporary painting, with a focus on the Leipzig School. A highlight in the modern art scene is the site of the former “Leipziger Baumwollspinnerei” in the Lindenau district.

The site of what was once the largest cotton spinning mill in continental Europe is now used creatively by numerous artists, designers and artisans. A total of eleven galleries and the studios of around one hundred artists are located here. These include internationally famous names such as Neo Rauch, Rosa Loy or Tilo Baumgärtel. There are also several workshops and manufactories for handicrafts.

If after lots of art and culture you want to enjoy some family time or an exciting game at the Leipzig stadium, you can simply walk from the Hyperion Hotel Leipzig to Leipzig Zoo in 15 minutes or take the tram to the Red Bull Arena Leipzig. If the Red Bulls are not playing, you can also go on a guided tour of the stadium and take a look behind the scenes.

The Belantis amusement park, located just outside the city, promises a lot of fun and excitement with its roller coasters and other rides. Stay centrally and comfortably at the Hyperion Hotel Leipzig and discover the many attractions of the city!

Places of interest near the Hyperion Hotel Leipzig

a concentrated load of culture and education

Passing the “Schwanenteich” and the Opera House, you can reach “Augustusplatz”in a few minutes from the Hyperion Hotel Leipzig. As one of the largest squares in Germany, it is surrounded by the Opera House, the “Gewandhaus” and the modern university buildings. In the City Tower – the former “Weisheitszahn” of the university – there is a panorama restaurant and a viewing platform.

Leipzig's most famous restaurant awaits you in the “Mädler-Passage” near the market square. Goethe liked to sit in “Auerbachs Keller” and set a literary monument to the wine bar in his “Faust”. The entrance to the cellar is flanked by Mephisto, Faust and the students in person – made of bronze. The walk from the Hyperion Hotel Leipzig to the city centre takes about ten minutes.

Home to Bach and the "Thomanerchor"

The “Thomaskirche“ is the former domain of the composer Johann Sebastian Bach and the home of the “Thomanerchor”, which was founded in 1212. The church, consecrated in 1496, has warm colours and a decorative ribbed vault. The famous boys' choir sings regularly to the weekly motets. Travelling here from the Hyperion Hotel Leipzig takes 15 minute by foot. 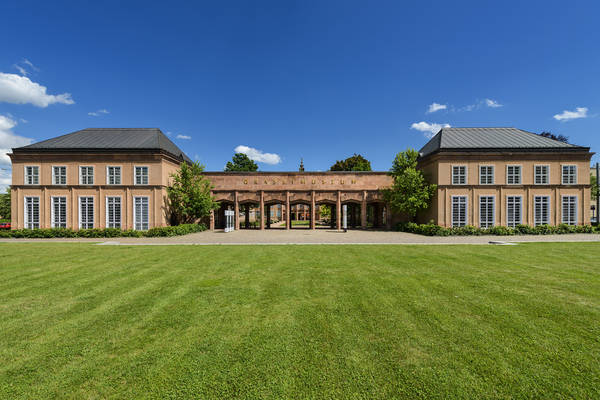 The “Grassimuseum” – named after the merchant Franz Dominic Grassi, who made the building possible – was built at the beginning of the 20th century in the style of the New Objectivity and Art Déco. Visit the “Museum Angewandte Kunst”, the Museum of Ethnology or the Museum of Musical Instruments. Travelling here from the Hyperion Hotel Leipzig takes less than 15 minutes by foot.

Monument to the Battle of the Nations

a monument of superlatives

91 meters high, 300,000 tons of building material and 500 steps to the viewing platform: The Monument to the Battle of the Nations in Leipzig against Napoleon's troops is an impressive reminder of the more than 90,000 dead from October 1813. The “Ruhmeshalle” and the museum are also worth seeing. Travelling here from the Hyperion Hotel Leipzig takes about 15 minutes by car or ten minutes by suburban railway from the train station.