Mainz on the Rhine, Mainz on the Main, Mainz as the capital of Rhineland-Palatinate directly on the border with Hesse - the city's location alone promises a broad variety of options. What's more, the city has a two thousand-year history dating back to its foundation by the Romans: there is so much to discover in Mainz. For example, a wander along the Rhine promenade from the H2 Hotel Mainz is an ideal stroll through the city, passing the Electoral Palace, the Baroque Parliament, the Rheingoldhalle and the modern city hall, which is officially listed as a cultural monument.

The Rhine boats, which invite you to enjoy a boat tour on the river, also dock on the promenade. Further along the promenade you will also reach the old town with St. Martin's Cathedral and the pretty alleyways around Augustinerstraße. At the end of the shopping street is the so-called Kirschgarten, or ‘cherry garden’.

From the H2 Hotel Mainz it is not far to the Kunsthalle Mainz, which is also found right next to the customs port. International contemporary art is shown here, always with the aim of presenting and combining current topics in politics and society. For top quality cultural entertainment in the evening, it is worth reserving tickets for the Staatstheater Mainz. Various venues for dance, drama, music, opera and young theatre can be discovered at the Großes Haus location on Gutenbergplatz and the Kleines Haus location on Tritonplatz.

Furthermore, a visit to the Landesmuseum Mainz, one of the oldest museums in Germany, is an ideal option. This important collection of art and cultural history can be found in the attractive Baroque setting of the "Golden-Ross Kaserne", the modern glass and steel annex buildings, and the electoral stables.

For families with children, the Museum of Ancient Seafaring, which is housed in a listed 19th century locomotive hall, is certainly exciting. Here you will learn all about ancient boats, from simple canoes to imposing battleships. The Natural History Museum is also a wonderful place to spend a few hours: it provides an extensive account of how Rhineland-Palatinate and its plant and animal life developed. In addition, there is a collection of minerals and demonstrations of today's animal world in recreated habitats. For film and TV fans, however, a visit to ZDF in Mainz Lerchenberg is worth the trip.

Situated south of the Taunus, Mainz is also ideal for excursions to the scenic wine-growing regions of the Rheingau. The historical and cultural landscape is characterised by flat sloping vineyards descending to the banks of the Rhine, picturesque villages and wineries. In addition, numerous churches and monasteries, castles and palaces, often with wineries or restaurants, invite you to take a visit. Worth seeing are Rüdesheim and its picturesque Drosselgasse streets, Eltville with its electoral castle and the Johanniskirche church, or Kiedrich, the wine village with two Gothic churches.

As the capital of Carnival, Mainz also has a highlight to offer in winter: the popular Mainz folk festival becomes a season all of its own, delighting with days of fabulous fun and celebrations throughout the night. District parades, parties, and of course the famous Shrove Monday Procession are an experience you won't forget. You can find out everything you need to know about this topic at the Mainz Carnival Museum! Experience a city with a long history, a modern city flair, a Rhineland joie de vivre and romantic vineyards, and stay overnight comfortably in the H2 Hotel Mainz!

During a guided tour of the ZDF broadcasting centre in Mainz Lerchenberg you can take an exciting look behind the scenes. A film about the history of the ZDF is followed by a tour of the site. The tours focus on the studios and television production or a dress rehearsal of the ZDF-Fernsehgarten TV show. The guided tours are free of charge, the minimum age for participation is 12 years.

Places of interest near the H2 Hotel Mainz 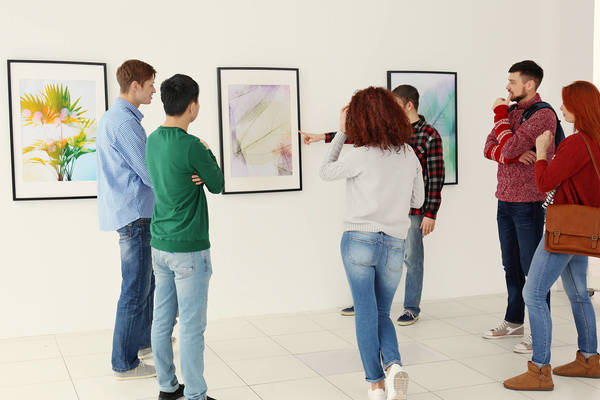 The Iron Tower - Art exhibitions in the watchtower

Behind the Rheingoldhalle, a little away from the Rhine in Rheinstraße, the Iron Tower  and the wooden tower rise at a distance of about 500 metres. The medieval city towers were part of the city's fortifications. Both received their present Gothic appearance in the 15th century. The Iron Tower owes its name to the iron market that used to be held nearby, while the wooden tower was named after the city of Mainz's wood-stacking yard on the Rhine. In later times, both towers were used as a prison – among others, the robber Johannes Bückler, who became famous under the name "Schinderhannes", was imprisoned in the wooden tower. Today, both towers are used by associations and initiatives, and art exhibitions are regularly held in the Iron Tower. 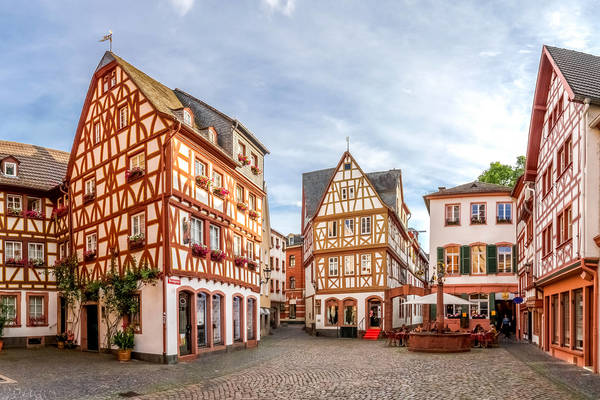 Augustinerstraße – A shopping street with a long tradition

Augustinerstraße is not only a popular and lively shopping street, but also a particularly beautiful street. Its course and that of its side street are still reminiscent of the medieval townscape. The whole street is protected as a monument zone. Take a stroll through the shops and see the typical half-timbered facades and the commercial buildings with their historic red sandstone arches. Some also feature a playful cast iron design on the ground floor. In the middle of the street rises the impressive baroque front of the Augustinian Church. Stroll down the street, browse in shoe shops, boutiques and other small shops, or stop off at one of the cafés and bistros. 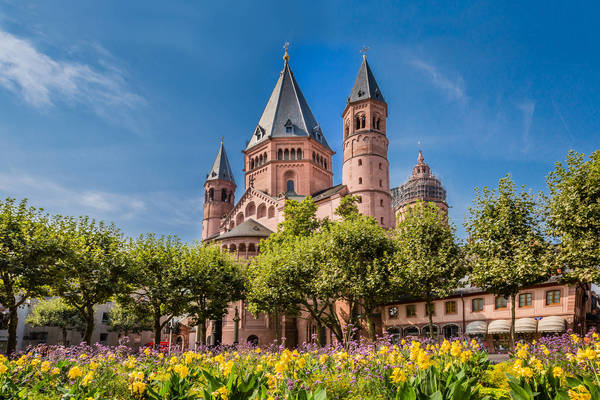 The Mainz Cathedral of St. Martin is a Romanesque pillar basilica and, along with the cathedrals of Worms and Speyer, is one of the three Rhenish imperial cathedrals. On the day of its consecration in 1009, the cathedral was destroyed in a fire, presumably caused by the festive illumination. The cathedral was on fire again in 1081 and 1137. During the respective reconstruction works, the initial building was extended and supplemented with late Romanesque and Gothic elements. View the impressive funerary monuments of the archbishops on a tour, descend into the two crypts and also visit the Romanesque St. Gotthard's Chapel, built as its own double chapel! Also worth seeing is the late Gothic cloister. Today, the cathedral and diocesan museum is housed here and in the adjacent chapter buildings, where works of art from two thousand years of history can be admired. 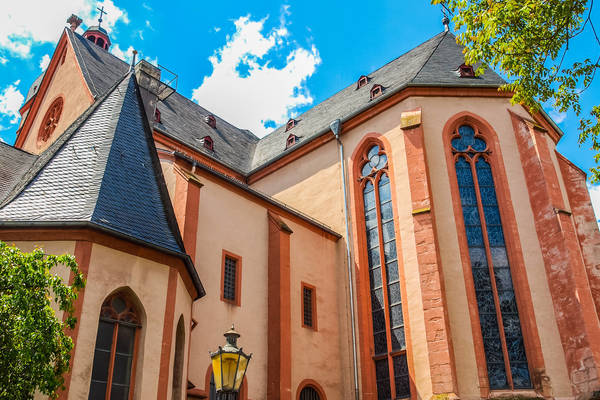 The oldest Gothic hall church on the entire Middle Rhine and at the same time one of the most important churches in Mainz is the Catholic Parish Church of St. Stephan. It was founded as early as 990 by Archbishop Willigis – but the original, Romanesque wooden building was replaced by a successor building completed around 1340. Due to an explosion in a nearby powder tower in 1857 and air raids during the Second World War, St Stephan's Church was severely damaged and the interior decoration was lost. The windows of the church are unique today: they were designed in 1978 by the painter Marc Chagall, who wanted them to be understood as a contribution to Jewish-German reconciliation. Chagall executed the black solder paintings with his own hands until his death in 1985. One of the most famous scenes depicted in the bright blue windows is the temptation of Adam and Eve. Also Gothic churches in the old town are the parish churches of St. Emmeran with an older Romanesque tower from the end of the 12th century, as well as the church of St. Quintin and the Antonite Chapel. 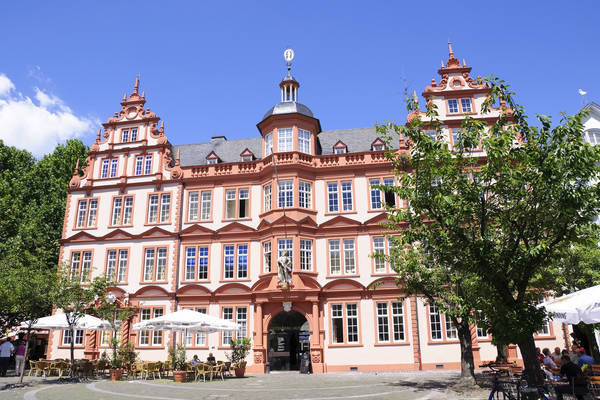 Gutenberg Museum – The history of printing

The Gutenberg Museum in Mainz was founded in 1900 to mark the 500th anniversary of Johannes Gutenberg's birth. This makes it one of the oldest museums of printing and lettering art in the world. Learn in detail about the printing technique invented by Johannes Gutenberg in Mainz in the reconstructed Gutenberg workshop. In addition, the exhibits provide a deep insight into the history of printing technology, typography and mechanical printing.  The most valuable objects in the museum are two of the 49 surviving original editions of the Gutenberg Bible. This is the first book ever printed in this way.